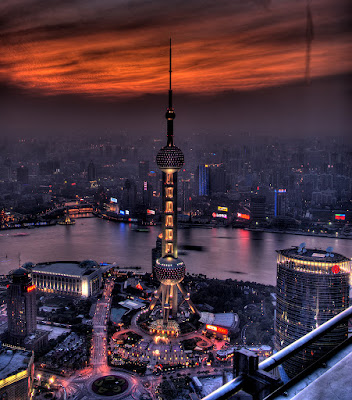 I didn't take this picture, and I'm afraid I don't know who did, but man, that's a nice shot.

A little history (since you asked.) The Huangpu river is a natural divider of Shanghai. I live in the Pudong are of the city which is east of the river (pudong literally meaning east of Haungpu.) This area is also known as the "new area" as it is a relatively newly developed part of the city.

Quite literally in the early 90s most of Pudong was in fact nothing more than rice fields and farm land. It was then that the city decided to give foreign investors something to do and it has grown by leaps and bounds over the last two decades.

This picture was taken from Pudong looking towards the main city. The tall glittery buildings you see in the foreground is the commercial district of Pudong, and the rest of Shanghai is across the river.

The big tower in the center of the picture is the Pearl Tower which is a very famous landmark in Shanghai. The area just beyond the river is known as the Bund which is a long stretch of buildings that is now mostly known for lots of shopping, but also contains many old school China architecture.http://www.blogger.com/img/gl.link.gif

The skyline in Shanghai is absolutely gorgeous (when you can see it, for it is often obscured by the smog.)

And that's your lesson about the picture.

**Edit** I can't make comments so I'll just add an addendum here, and maybe someone will read it. Mullins I have talked about food. Several times. But it is over there on my shanghai blog. I tend to not post my China adventures here as I already post them there and it seems silly to double post. I mean, if you are interested just drop by there.

Boy oh boy, talk about a quiet midnight at the cafe!
Well, thought I would share with ya'll what I have been working on.
I do a weekly e-newsletter for the parents of the school I work for. It has some basic computer tips and occationally, some ways to protect your kids better from online dangers. I will also include a relavent news article sometimes and I always provide a Dell coupon or special link (Dell sends me coupon codes and such that are actually pretty good deals. I pass it on to the parents... and now, you).

To save myself some time (and try to earn a few Goggle bucks) I now own and operate www.techtipsforparents.org

There you will fine a rough idea of what I am trying to accomplish, along with the archives of my last 10 or 15 articles.

Soon I will have a few how-to videos posted up on there.

The parents rave about this and love it, yet I can't get ANY of them to send me questions and concerns that they would like addressed :(

The Stubbs pay a visit

Our good friends the Stubbs paid a visit to central Alabama this long weekend. It was wonderful to see them and spend time with them. My only regret was that we were not able to spend MORE time with them. With the Sips having two boys, the Stubbs having a new boy, and us having a new boy, schedualing and visit times were limited. Plus, my in laws were in town staying at our home.

Even so, we were able to have dinner with them Friday night, cook out with them at the Sips Saturday night, and go to church and lunch with them Sunday.

Here are some videos made during the visit. The first video has a few greetings to our friends the Brews over in China...

For about a year now I have been saying that I am going to buy some real webspace and get a regular URL for my blog. The reasons for this are many stemming mainly from my desire to have some real web real estate. My blog has grown to have a very decent hit count (I generate anywhere from 200 to700 unique visitors a day) and I think I can gain even more when I get out of the whole wordpress/blogger free spaces.

Now of course I won't be making mad money with it anytime soon, but a professional look coupled with some targeted writing could pay for my web space plus buy me the occasional Coke product. That's good enough for me.

I am super serious this time about getting web space this time. For about eight bucks a month I can get a .mac account which has more than enough space and add-ons to make it worth my while. I am telling everyone this because I need your help in the design department.

The first thing I need is a banner for the top of the blog. I am going to keep the name "Midnight Cafe" and as such the banner should reflect this. I am thinking maybe something in a dark blue (to represent the night sky) for a background color with yellow writing. I think maybe having some little stars mixed in would be good, and even that we could make the "c" in cafe look like a crescent moon.

I might like some little cocktail glasses and a baguette or something in there as well. I'm not all that set on that idea, but something to represent the cafe part of Midnight Cafe would be good.

I'm not really a design guy and I totally suck at drawing this type of thing, which is where you guys come in. Any of you creative types that has a moment of free time I would absolutely love it if you would make up some banners for me.

I know some of you could do it, and do it awesome, but I also realize you may not have the time.

Since China makes it impossible for me to comment on this blog, please submit the banners or ask any questions to my e-mail. Also, if anyone has any interest in helping me create the entire blog let me know.

Get This Blog Via E-Mail

Places To Go After The Cafe