I, one of two Information Technology men in the group, have screwed up my computer. Well let's just leave it at, I managed to delete my address book and all e-mails in Outlook simply becaue I did not realize an outlook.pst associated with an unused account on my computer was also associated to my current user profile. I deleted that old profile to save some space (laugh jamison 500 mb though I had 16GB free). So let this be a lesson to you, "look before you leap".

Oh Brother, Where Art Thou? 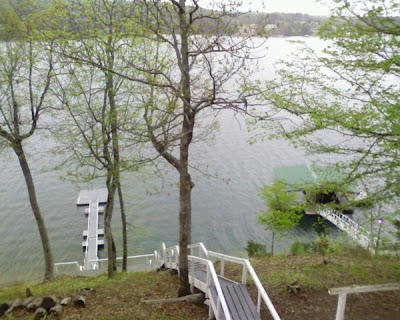 I have two reason's for this post. I'll get to the one that affects the gang first. Look at these pics. I might have found the spot for our get together. The place will hold all of us easily and it has digital Satelite. The cost a good faith donation to the owner and nothing more. The location is near Jasper, AL.

OK, so why did I end up at this spot?

My two brothers and I had our first annual Brothers Only weekend (3 full days together). We stayed in this lake only because bad weather was on the way and a pop-up camper did not sound like a good idea. The weekend was all about getting to know each other, setting priorities, discussing family (each respectivily and our parents), and current activities and health concerns, etc. It was great. There was a formal talking point agenda but no set schedule. We talked, walked, skipped rocks, played a few outdoor games, watched movies, ate, and produced copious amounts of flatulence.

The weekend was magnificient and I hope we can make it an annual thing. 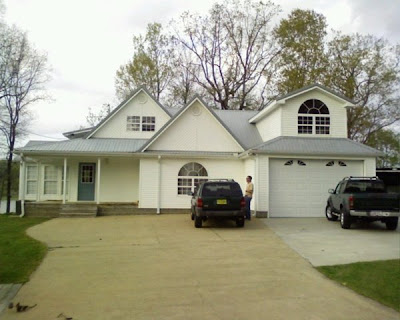 Jamison has joined the ranks of Brew...

No, I am not going to China... but I am a BlogCritic now (blogcritics.org) which likely means nothing to you guys, but it means LOADS for my site and my name. BC gets thousands of hits per day and covers the gamut of topics. And since there are so few Science and Tech writers with BC, my articles typically make the front page. Kind of exciting...

My latest article is here

Hello, My Name is Chase I’m curious, confident, and sometimes sneaky (especially when I want to sleep in Mommy and Daddy’s room at night). I really love to play with toys when a human is on the other end of it and I like to rough house. When I’m not playing, I’ll chew on my bone, lick up things I find interesting on the floor, or just sleep. I’m also very quite.

I’d really love a home with someone who is there most of the time to play with or watch over. I also might be happy with a couple other dogs my size or larger. 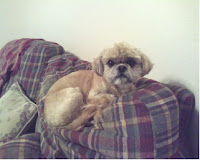 I have a few traits you need to know about:

If you know of a good home or want to take me home with you, please contact my Mommy and Daddy (contact info excluded)...

Everything above this point (including the title) was a part of a flyer I made to find a new home for Chase. Today, I took him to that new home. Unless something happens, I will never return to see him. I can't do that to him or myself.

When I returned home I lay on my stomach flat on the floor and cried and prayed. Why? (And, why am I holding back tears now?) Chase was just a dog, he turned 8 years old Feb 10th, and here I am writting an epitath just as if he died recently. I have lost part of myself. For eight years, I walked him, bathed him, played with him, and confided in him. I've seen Alexandra recently take to him and start playing with him. And now, I won't get the chance to see him grow old, he won't be there to greet me when I come in the door, he won't be around to...

Dream: A Village, A Lion, and a Peculiar Death

I was in the suburbs with its nice, lovely houses, and quiet, manicured lawns, yet the community was full of third world looking natives. The dream started with a man being brought before the people who was badly burned all over. The local doctor had a look at him but confirmed there was nothing he could do to save the man, or ease his pain.

It was against the villages moral code to euthanize him, but they agonized over his pain. The doctor had a rather bizarre plan. He would take the man and place him inside a garage. He would then put a lion inside the garage. Sooner or later the lion would eat the sick man and put him out of his misery. The village would then kill the lion and eat it. This way they would also be consuming the man and absorbing his wisdom, or something. This was perfectly acceptable and good, even though killing them man themselves or eating him directly would be bad.

The entire village gathered around the dying man and the garage. The man's wife or mother, I couldn't tell which, wailed loudly as the body was moved towards the garage. At some point the loved one grabbed ahold of one of the men carrying the dying man and started to do the conga behind him. Others gathered and they formed a long, and boisterous conga line.

After a bit we went inside, only to find a different sort of scene than we expected. The lion was lying dead beside a dead mauled boy, while the burned man was standing upright with a knife in his hand. It seems he had pushed the boy towards the lion which proceeded to eat the boy. As the lion was distracted by the boy, the burned man killed it with his knife.

The village uproared at the man having used the boys life to save his own. The man replied that he wasn't quite ready to die and thus did the only thing he could do to stay alive.

If Life Hands You Lemons...Run!

Stuck Inside of Memphis (With the Mobile Phone Blues Again)

That has been my mantra against mobiles for many a year now. It has always been true too. Until recently at least. Until we moved to China, I had never owned a mobile phone. Truth is I never needed one. I'm not exactly a big telephone guy. I don't make many calls. Don't receive many calls. I try to stay off the phone as much as possible.

I had never seen a need to get a mobile. I've always had a house phone, and I normally have a direct line at work. I spend pretty much the majority of my time at either of those places, and those who need me have those numbers. When I am out and about, I have voice mail where I can receive messages. Do I really need to talk to anybody so badly that I have to take the call while I'm driving? Shopping? At church? No on all accounts.

I'm sure they come in useful for emergencies, or automobile problems. People survived for many years without mobile phones during emergencies and auto problems, I used to say to myself, and thus I can survive without them now.

And so, without a phone, I often found myself high and mighty. Abuses abound with cellular phones, for sure. You can constantly see people talking on their phones while driving. These same people will be swerving across lanes, driving entirely too slow, they are slow on the take off from stop lights, and often are seen cutting others off.

So many times I see cell phone users, rudely take a call while they are chatting with someone in person, or gathered at a meal. Even worse I see them constantly taking calls while they are ordering food, or at the cash register while shopping. 'How rude' I think to treat the cashier so poorly as to not acknowledge them.

In Shanghai, mobile phones are just about necessary. Traveling about the city, it is very easy to get lost, or separated from the group. Cell phones come in very handy. Often, when I am out, I have had to call someone for directions. Plentys the time I have called someone when getting into a cab so that they could tell the cab driver where to go. Shopping is an adventure all its own. The stores are often very large, and always crowded with huge amounts of people. Amy and I often call each other in the stores just to figure out where we are.

I am sure we could manage without cell phones whilst living here, but the convenience factor finally made us succumb. And now I have fallen prey to all the things I hate. The other day I was shopping for some warm clothes for Japan and just as I was coming up to the counter I got a text message. Amy got one too, at the same time. Both of us immediately got out our phones and began texting a reply.

I threw my items for purchase up on the counter. Paid no attention at all to the cashier, and tried to fish out the cash whilst still texting.

Then it dawned on me on what I was doing and I was so ashamed.

I understand now why so many people become so rude with these devices. It is so hard not to answer when the phone rings. It is crazy difficult not to read and reply to a text when I receive them. There is something so primal about the need to answer the call. In my pre-cell phone days I would often not answer my land line. Certain times of the day I knew the call was not going to be for me, or would be annoying and I'd simply ignore the ringing. I can't do that with my cell phone.

Maybe it is because I can tell who is calling now. Knowing that it is my friend Sara, or my sister makes me need to answer. Even not knowing the number makes me interested in who it could be.

And thus I have become what I have hated.

Brewster Comments
Exactly Diana. I text all the time cause it is so much easier, and cheaper to do so than to call. If I have something slightly complicated to say, I'll call, but if it is just making plans or whatever, I always text.

Get This Blog Via E-Mail

Places To Go After The Cafe